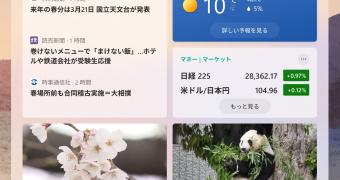 Microsoft has just released Windows 10 build 21313 for users in the Dev channel, and the highlight is the news and interest update that now becomes available for users in more languages and markets.

Microsoft is bringing a new experience to the taskbar, allowing users to pin the weather to the taskbar and expand the UI with a dedicated popup showing news and other info.

Previously, the feature was only available for users in certain regions, but Microsoft is now making it available for more testers.

“We’ve heard your feedback! Today we’re excited to announce that we’re expanding the news and interests experience on the taskbar to a broader set of international languages and markets. Previously, the experience was only available in United States, Canada, Great Britain, Australia, and India. This now means that the news content, weather forecasts, sports and finance updates will be based on your location anywhere in the world!” the company explains.