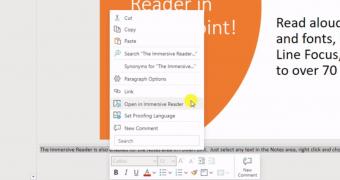 Microsoft has recently announced that its Immersive reader is making its way to more Office apps, including PowerPoint for the web, OneDrive, SharePoint, and MakeCode.

The Immersive Reader makes it so much easier to read selected text, as it opens in a dedicated UI with the focus put specifically on the content.

Opening some text in the Immersive Reader in PowerPoint, for example, is as easy as selecting the text, right-clicking it and then launching this feature.