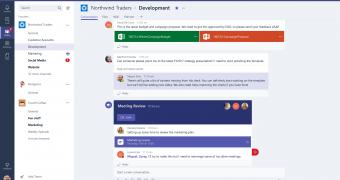 Microsoft Teams is one of the apps whose adoption skyrocketed in the last 12 months or so, and it’s all because of a very simple reason: as the world started to work remotely, everybody needed a way to remain productive even from the safety of their own homes.

So the app many picked was Microsoft Teams, with the adoption of the service reaching record levels throughout 2020 to eventually reached 115 million daily active users.

Now it looks like Microsoft is working on giving the Microsoft Teams desktop app a major overhaul, as Microsoft leaker WalkingCat discovered a new Teams Alpha client currently being worked on.

But surprisingly, this app isn’t a desktop client itself, but a web app, which seems to suggest that Microsoft is trying a different approach this time, going for a universal application that would work on all platforms.

“Interestingly, this version of Teams app is simply a wrapper of Web app, much like the New Outlook app, is this what the future of … (read more)