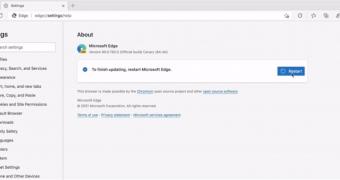 Microsoft has announced a new update engine for Microsoft Edge on macOS devices, with users running the Canary build getting it as we speak.

The company explains that the AutoUpdate system that was originally used by Microsoft Edge was a little bit confusing given it’s also used by Office applications, with the process overall also being rather slow.

So the company has started the work on a native update system for Microsoft Edge on macOS, with the new experience currently available in the Canary builds of the browser for Intel chips. Microsoft explains it’ll also be included in the builds aimed at Apple Silicon shortly.

The new update system is supposed to make the process overall feel more seamless, especially because the updates will now be installed in the background all automatically.

“The new update experience is now Edge-native. It will solely be responsible for updating Edge-related products and wil… (read more)