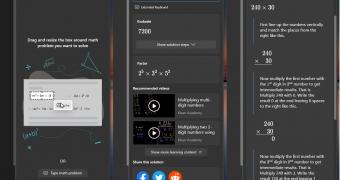 Technology comes in incredibly handy these days, not only for things like sending an email and chatting with someone, but also in ways that you wouldn’t necessarily want your kids to be using.

No, not those ways, as what I’m referring to is automated tools to solve math problems, all in a matter of seconds. Because yes, tech can do that and yes, it’s becoming a lot easier to use these days.

Microsoft Edge, for example, is working on adding a match solver in the browser, with the Canary version of the application already offering this little feature to a bunch of users.

The way it works is incredibly simple. As Reddit user Leopeva64-2 discovered, there’s a new toggle for a feature called Math Solver in the Settings screen.

When you enable it, the toggle adds a new button on the toolbar, allowing you to launch a math solving inte… (read more)