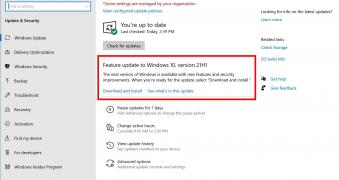 Microsoft is getting ready to finalize the work on another feature update, and this week, the company confirmed that it has picked a final build for this new release.

Windows 10 version 21H1, or the May 2021 Update, will go live next month, and in a recent announcement, the software giant explains that build 19043.928 is likely to be the final build, or the RTM as everybody calls it, for the upcoming release.

Microsoft says users in the Beta and Release Preview channels of the Windows Insider program are currently running newer builds, but this is just because the company keeps working on further improving the experience with this new release.

“Please note that the May 2021 Update will be offered to Insiders in the Release Preview Channel via our “seeker” experience in Windows Update at first. This means Insiders will need to go to Settings > Update & Security > Windows Update and choose to download and install 21H1. Once an Insider updates their PC to the May 202… (read more)