Last December, the city of New Orleans voted to ban facial recognition, joining Oakland, Somerville, Portland, San Francisco, and other cities that have successfully pushed back against the widely-criticized surveillance technology. Across the US, various nonprofits and politicians have opposed police use of facial recognition, predictive policing, and other technologies which are known to disproportionately target communities of color.

But in New Orleans, which boasts one of the highest rates of incarceration in the country, the opposition was led by Eye on Surveillance, a coalition of community organizers and activists—including Black youth, musicians, and sex workers.

Surveillance technology has never been a hard sell for elected officials in Louisiana. The state is sometimes called the world’s prison capital, and has had  the highest murder rate in the US for over 30 years. As Ursula Price, executive director of the New Orleans Worker Center for Racial Justice, mentions in the City Surveillance podcast, the state’s past history of policing is commonly used to justify expanding surveillance technology.

In 2012, New Orleans secretly partnered with the surveillance firm Palantir to use predictive policing and facial recognition technology. The city repeatedly denied using the technologies, and hid their existence from residents and most public servants until six years later, when The Verge uncovered details of the partnership. After a deadly mass shooting on the city’s famous Bourbon Street in 2016, the city developed a $40 million public safety plan that equipped police with military gear and led to the creation of the Real Time Crime Center (RTCC), a facility that monitors real-time footage from hundreds of surveillance cameras across the city.

“These private companies are like, ‘oh yeah, you guys have a high crime rate? Yeah, let me test out this technology.’ And that actually just collects a bunch of personal data and implicates people in crimes they’ve never actually committed,” Lucy Bloomberg, a member of the Eye on Surveillance coalition and an organizer with the New Orleans Chapter of Jewish Voices Peace, told Motherboard.

In 2017, the city had proposed its now failed Alcoholic Beverage Outlet (ABO) surveillance ordinance, which would have required any place serving alcohol to have surveillance cameras. The New Orleans Police Department (NOPD) also executed a series of “anti-trafficking” raids in clubs, and dancers and other entertainers began to protest against the raids and the ABO ordinance.

“There was the notion in our community in 2018, that having cameras in the bars would be just another way to target sex workers and other people,” Allie Beth, a researcher and community organizer with the stripper-led labor rights group BARE NOLA, told Motherboard.

In addition to clubs, DeeDee Green of Peace by Piece New Orleans also noticed new surveillance cameras placed near a garden space in the Hollygrove neighborhood, where Black youth gathered to learn about sustainability in Green’s program. Green started submitting public records requests to find out why the cameras were there. She was eventually referred to the Department of Homeland Security, but wasn’t given any concrete information.

“We figured if we couldn’t get the information from the city, what we would do is crowdsource the information and launch what we loosely called a campaign called Stopwatch,” Green told Motherboard. “The whole intention was to make people aware that these cameras were in our neighborhood.” On the Stopwatch website, the group built an interactive map where people could mark locations where they saw cameras. 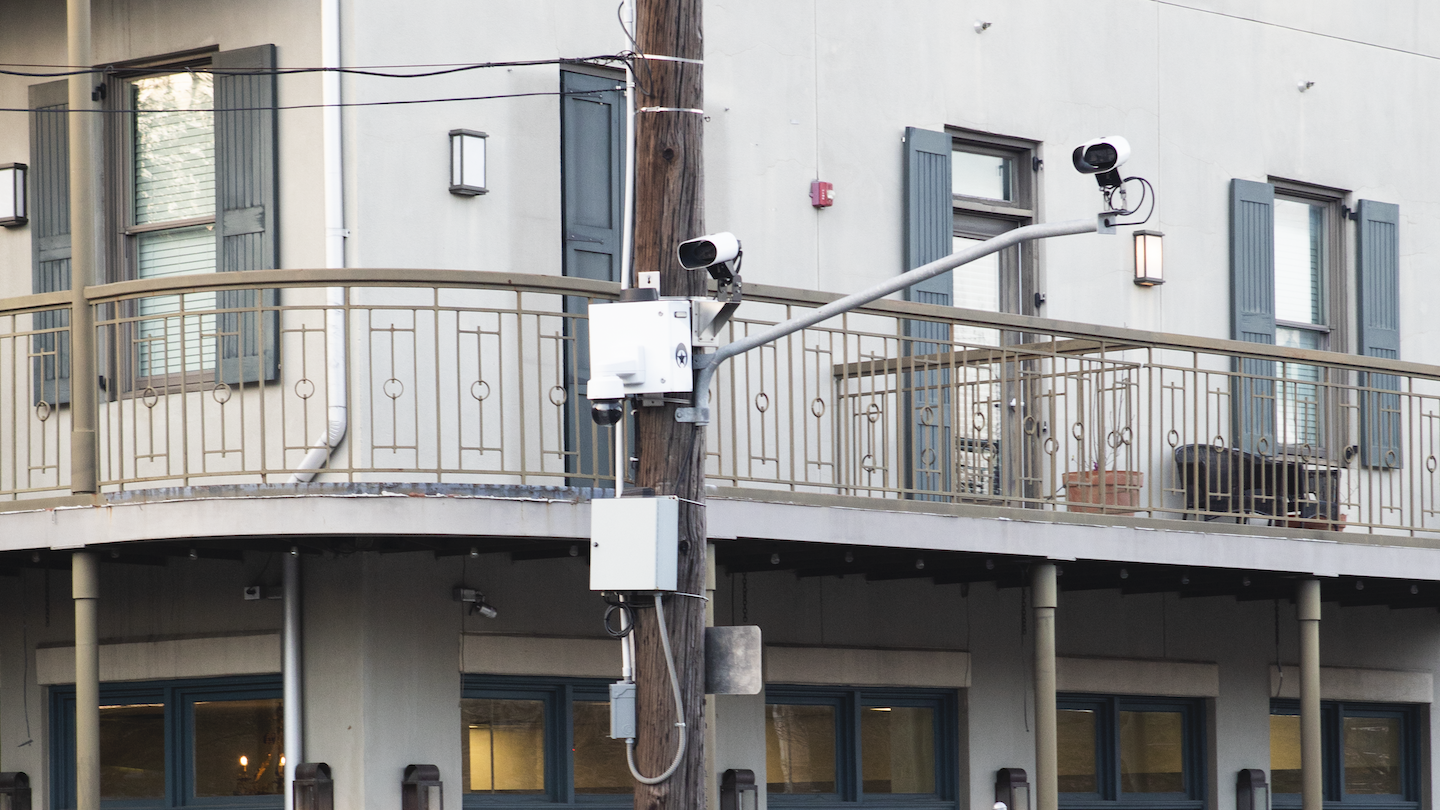 In early 2019, community activists attended a meeting organized by the Independent Police Monitor, a citizen police oversight board, and toured the RTCC surveillance facility. In addition to public police surveillance feeds, the RTCC also has access to privately owned and operated cameras, under a program called SafeCam. This gives the police access to hundreds of cameras across New Orleans. “It was like going on this very eye opening tour of this camera facility for the city that honestly left all of us a lot more disturbed than when we walked in and compelled us to say ‘we have to do something,’” said Beth.

Shortly after the tour, Beth, Green, and other activists joined with the ACLU and various local organizations like the Music and Culture Coalition of New Orleans (MaCCNO) and Jewish Voices For Peace to form the Eye on Surveillance coalition, with the goal of creating a united front against surveillance.

Throughout 2019, Eye on Surveillance organized a series of community events to educate New Orleans residents on the city’s history of surveillance, wrote op-eds for local publications, and organized an action called “Sazeracs Against Surveillance”—a public walk along a greenway in New Orleans to point out surveillance cameras. As the COVID-19 pandemic devastated New Orleans communities in March and April of 2020, Eye on Surveillance began sketching out a policy to ban technologies like facial recognition. The coalition looked to other facial recognition bans in the US—as well as groups like Stop LAPD Spying, and legislation like the European Union’s General Data Protection Regulation (GDPR)—to help guide the language of their privacy ordinance.

The ordinance passing is especially meaningful to residents of New Orleans, a city known as a tourist destination for Mardi Gras, music, and partying that also has a deep history of careral injustice against people of color. Chris Kaiser, advocacy director with the ACLU of Louisiana and a member of Eye on Surveillance, explained that the use of these technologies was perpetuating the same historical harm that has devastated those communities. “This is why I think Louisiana and New Orleans is such an interesting place to have the conversation. We have historically had the highest per capita rate of wrongful convictions, and it’s disproportionately racist white supremacist activities by police and prosecutors,” Kaiser told Motherboard.

While ordinance was a significant victory for privacy activists, New Orleans is only just beginning to reckon with its history of systemic racism—including the over-policing of Black and brown communities. Ultimately, activists say they want to create a deeper conversation about surveillance technology, which questions whether policing can create safety in lieu of investing in public services like healthcare and housing.

Renard Bridgewater, a community engagement coordinator for MaCCNO, says that  pushing that conversation will be a major part of Eye On Surveillance’s future goals. “I think [we need to] really go into 2021 ready and willing, and able to speak to folks […] with a sense of audacity and courage about what vulnerable communities would like to see done with the millions of dollars that [usually] go towards surveillance technologies,” said Bridgewater.