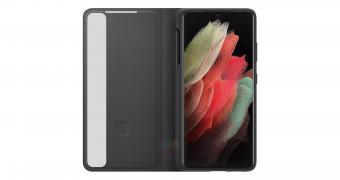 Samsung Galaxy S21 is projected to see the daylight on January 14, with Samsung itself finally confirming the Unpacked event in a teaser a few hours ago.

The company, however, hasn’t provided any specifics about the upcoming lineup of devices to be announced at the show, yet we already know pretty much everything there is to know about the new S21.

Including something coming exclusive to the Ultra model, as Samsung is reportedly planning to add S Pen support to this model for a long-term plan that concludes with the demise of the Galaxy Note series.

That’s right, Samsung wants to kill off the Note lineup, so the company is bringing the S Pen to the Galaxy S series, with the first step in this regard to be made this year.

New case of the Ultra model

Samsung Galaxy S21 Ultra would thus come with stylus support, only that the device won’t ship with this accessory in the box. Instead, it would be sold separately, and according to a report from read more)