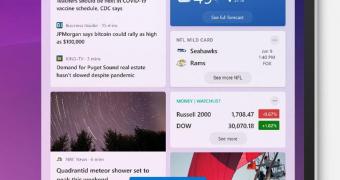 The news and interests experience in Windows 10 is getting a reset in the preview builds, Microsoft announced, as a bunch of new features are currently rolling out to testers out there.

Earlier this year, Microsoft announced this news and interests feature, which comes down to a new UI integrated into the taskbar and displaying content like the weather and information that’s tailored to you, including news.

The feature has so far been released to members of the Windows Insider program gradually, with Microsoft explaining it needs to collect more feedback before everyone can try it out.

The latest Windows 10 build includes several new features, including two columns of content as well as an option to show its UI only with a direct click.

“Over the last two months, we’ve been trying out several variations of the news and interests experience on the Windows taskbar. We have received a lot of great feedback from Windows Insiders and as a result, have landed on what w… (read more)