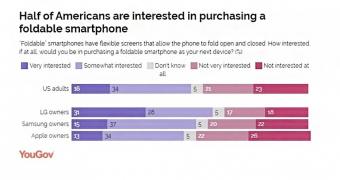 The foldable display revolution is under way, and companies out there are looking into ways to launch devices based on this new form factor, possibly at lower price points.

Apple too is believed to be working on a foldable iPhone, with the debut expect to happen either in 2022 or in 2023.

But according to a report from YouGov, the current iPhone owners aren’t necessarily interested in a foldable design and they’re still fine with the current form factor.

No less than 26 percent of the Apple users said they are not interested at all in foldables, while 22 percent said they’re not very interested. Just 13 percent are very interested, it seems.

Despite being one of the leaders in this push for foldable devices, Samsung also seems to be struggling with the low appetite for this form factor.

22 percent of the Samsung owners aren’t interested at all in foldables and just 15 percent are very interested.