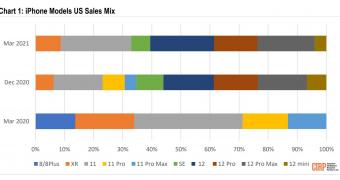 Apple launched the iPhone 12 family with a series of four different models, including an all-new 5.4-inch device called iPhone mini.

But according to people familiar with the matter, the iPhone 12 mini is selling so slow that Apple has even adjusted orders at its suppliers, lowering the production of this new device and instead increasing the one of the Pro models.

Furthermore, some said Apple could completely kill off the iPhone mini this year, but the latest information in this regard indicates the 5.4-inch device would stick around for at least one more generation.

And new data shared by CIRP indicates the iPhone 12 mini is indeed the slowest-selling iPhone right now, as even the iPhone XR and the smaller iPhone SE surpassed it.

iPhone 12 accounted for 61 percent of all iPhone sales in the United States, and iPh… (read more)