Symbols carry an undeniable power—whether it’s the Ankh, the crucifix, or the golden arches of McDonald’s.

For thousands of years, runes, glyphs, and icons have been used in occult rituals and spiritual practices to mess with reality. Today, drawings imbued with the desires of their creators—called sigils—are undergoing a resurgence. Advocates insist they really work, and a new app called the Sigil Engine automates the whole process, aiming to make inventing reality even more accessible.

A sigil is a symbol used for magickal practice, typically created from scratch by the practitioner, and imbued with psychic energy to influence events. (That’s magick with a k, to differentiate these rites from pulling rabbits out of hats.) Aspiring sigil creators could already tap into a wealth of resources to learn how to draw their own magickal signs, from online libraries to how-to guides on TikTok, or influential “chaos magick” texts like Liber Null and Condensed Chaos.

Skeptics might balk at the idea of drawing our own realities, but others may also find themselves surprised at the results, which believers say work best when they’re within the boundaries of your day-to-day life. “There’s no point charging a sigil to win the lottery if you don’t buy a ticket,” chaos magician and comic book writer Grant Morrison once wrote. To test out sigils, Morrison famously modeled a character after themselves in The Invisibles and began to see cruel events inflicted on the fictional figure, such as burst lungs, actually transpire in real life. They decided to be kinder to the character after that.

Users of the Sigil Engine, though, rely on code to do much of the legwork. When visitors land on the URL, they’re greeted by a sparkling black background and a prompt to type their “intention.” Doing so will set the Engine in motion, drawing the sign in bright red. Co-creator Darragh Mason, who hosts the Spirit Box podcast, describes this flourish as “a prayer or a moment of reverence to the goddess Babalon,” found within the Thelemic system first synthesised by British occultist Aleister Crowley. The backdrop alludes to “the great expansive void from which all things spring”.

“We wanted to create something that actually felt magical when you used it,” Mason told Motherboard. “For a lot of people in their magickal practice, the aesthetic helps give it more potency, so we were very conscious: we wanted to have the process of creating a sigil—removing the vowels, removing repeating letters, creating the actual symbol itself—to be experiential, something that drew you in and [gave] it a sense of wonder.” 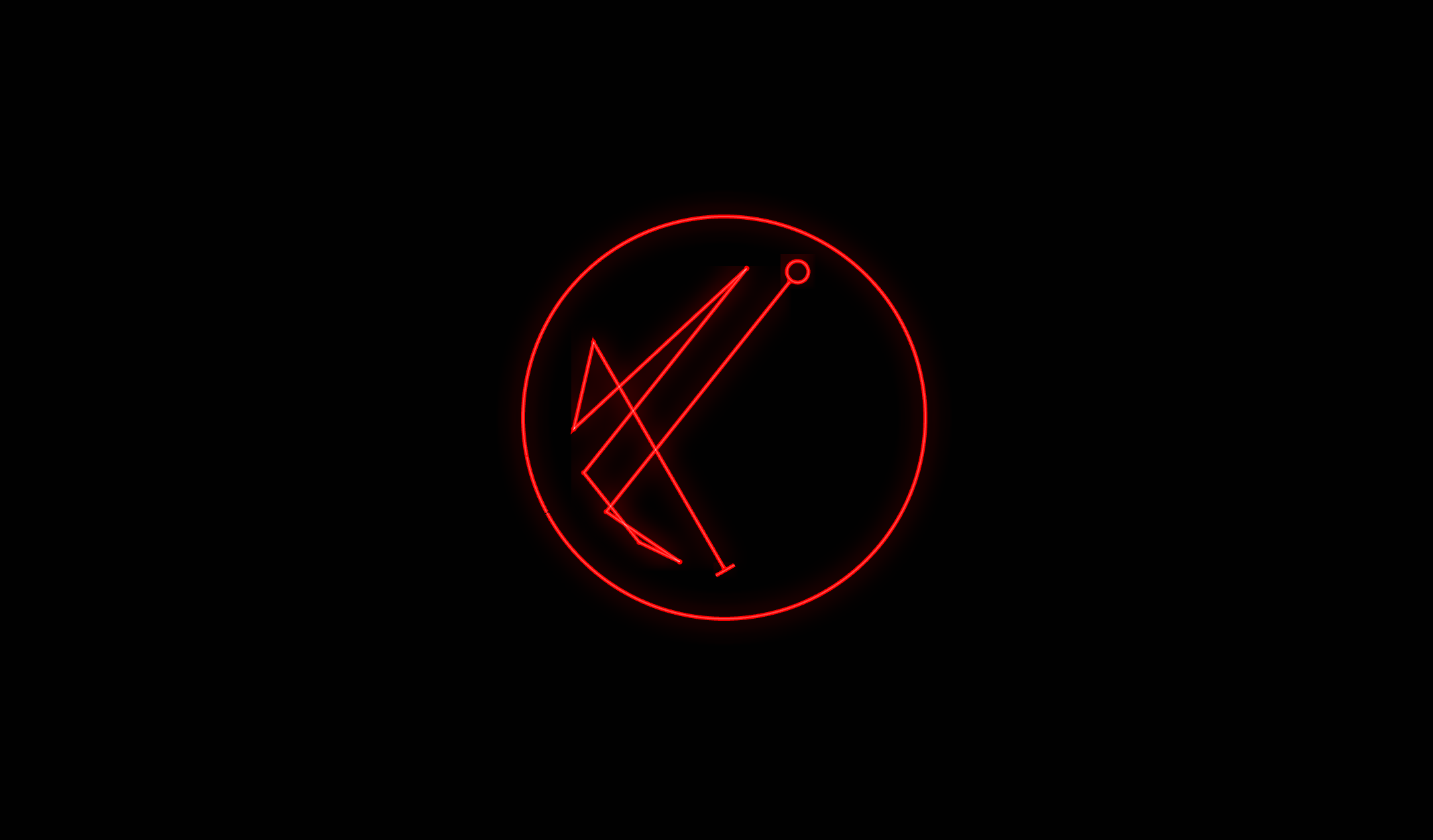 To ensure the final sigil is almost guaranteed to be unique, the application logs the speed of typing, the time between keystrokes, and compares these to the entirety of the Liber Cheth vel Vallum Abiegni, a Thelemic text that’s contained within the code.

The measurements are combined to return a unique value for each of the base characters, says co-creator David Tidman. More number-crunching normalises a very large figure to between 0.0 and 1.0, which is finally used to position each character on a point around the circle—for example, a character with a value of between 0.51 and 0.54 would be located at the 11th of 21 points in total. At the moment, whatever the user types  is stored temporarily and then deleted, but Tidman says in future this information won’t be stored at all, and that there are no personal identifiers logged when visitors type their intentions.

The final illustration generated by the Sigil Engine is placed within a circle—a nod, its creators say, to the Goetic seals of demons in the Lesser Key of Solomon, a medieval “grimoire,” or magical book, from the mid-17th century, that more recently made an appearance in Ari Aster’s Hereditary.

Released in late 2020, the Sigil Engine has now been used more than 300,000 times, with people typing their magickal intentions spread across seven continents. According to the creators, at least some of the Engine’s users say it works, with success stories covering everything from home renovations to fertility, and even those who have made automated sigil production part of their daily routine.

It was important for both Mason and Tidman to have the aesthetic drive the application, and keep the whole process feeling experiential, magickal, and accessible. “We wanted the input of the intention to feel like part of the app, so we created our own keyboard component from scratch instead — each key touch pulses red, with the key components slightly transparent so particles show through, which really connects the keyboard to the app itself,” Tidman told Motherboard..

The Sigil Engine was first conceived as a vast, participatory art project, but the sheer amount of interest has made their original idea to project the sigils one after the other in a public place impossible. For Mason, though, the purpose of creating the Sigil Engine was not only to build an experiential, useful tool, but to better understand whether magick could be made to work within a digital context.

Belief in magick has persisted throughout history, and technological advances have changed mostly the scale, accessibility, and form in which it is executed. In antiquity, magickal rites were performed first through repetition of speech. Then came writing, books, the printing press, and now, the internet and social media. “There’s always been that kind of tension between the shift of technology: does it devalue? Does it still work? What’s the next step: can it work in digital format?” said Mason.

People have tried to elevate their consciousness, influence reality, and gain special insights with signs and symbols for thousands of years. If you look closely at modern Chinese characters, for example, you can see that they’re ancestrally related to something called ‘Oracle Bone Script’—where emblems were carved into bone and used for “pyromantic divination,” or fire magic—dating back to the 2nd millennium BCE. The Greek Magical Papyri, a book of spells, hymns, and rituals with some components from the 100s BCE, also continues to capture the imagination of practitioners and academics today.

But sigil practice as we recognize it can be traced to the work of English proto-surrealist Austin Osman Spare, one of the most “charismatic characters to come out of the occult revival of the late 19th and early 20th century,” writes David Keenan in his book England’s Hidden Reverse: A Secret History of the Esoteric Underground.

Spare believed that sigils enabled “effective communion with subconscious levels” and the “lodging of a desire or wish at subconscious levels without the conscious mind being involved or aware”. In other words, the mere creation of a sigil helps to nest the idea within a person, who can then go about fulfilling their wish, perhaps automatically. “By virtue of the Sigil you are able to send your desire into the subconscious (the place where all dreams meet),” Spare once wrote.

Technology like the printing press has allowed magick to scale, but the Sigil Engine is not the first experiment with sigils of its kind.

A collective called Thee Temple Ov Psychic Youth (TOPY), formed in 1981 with Throbbing Gristle founder Genesis P Orridge and others from England’s transgressive industrial counter-culture, held sigils at the heart of their practice. This included concerted sigil creation on the 23rd hour of the 23rd day each month, and even mass-masturbation events that coordinated orgasms in tandem. “[The Temple was] remarkable for setting up a non-hierarchical system to explore sex magick and sigils in a co-ordinated international level,” P Orridge is quoted as saying in England’s Hidden Reverse. “Nobody else has synchronised literally thousand of orgasms to a single purpose, just to see what happens!”

To Owen Davies, a history professor at the University of Hertfordshire and the author of Grimoires: A History of Magic Books, the latest digital iterations of magick are not far away from their origins. The internet and computers, he says, do not vanquish belief in magick, but create new ways to engage with it.

“The relationship between magic and technology is entwined,” Davies told Motherboard. “When we first move from papyrus to books, that’s a big technological change—it also shapes and changes the way in which magic is written, disseminated.”

“When you get the advent of moving from carving on clay tablets to inks, that’s a new technology,” Davies continued. “When you introduce inks, you can have ink of all different types, and different types can have new meanings and potencies. Then you move to the printing press again, another new technology, which once again democratizes in the sense the production of sigils.”

As technology marches towards an even more direct relationship with the physical world, the Sigil Engine may also follow this trend. Mason and Tidman are already considering generating AutoCAD files, so that sigil designs can be easily exported to 3D printers. They are also toying with the idea of creating a full mobile application, which would allow users to save the sigils more easily to their devices, or “dissolve” them permanently within the app, mirroring the destruction of paper sigils in more traditional practice.

With the exception of the ultra-rich, most of us can agree that reality has been especially shitty lately. As Grant Morrison said of sigils at the 2000 Disinfo Conference: “I’m here to tell you to try it when you go home tonight because it fucking works … We’re dealing with some kind of operating system that can be hacked, using words, and words seem to be the binding agent for this thing, whatever it is.”

There’s no guarantee we can magick our way out of the various crises we now face. But with the Sigil Engine taking less than 10 seconds to spin up, at least it’s easier than ever to give it a metaphysical shot.