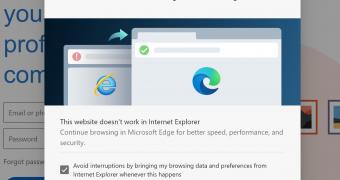 Microsoft has already completed the transition from EdgeHTML to the Chromium engine, so the new Microsoft Edge is now running on the same engine as Google Chrome.

What this means is that Microsoft Edge is now available cross-platform too, so in addition to Windows 10, it’s also available on Windows 7, Windows 8, Windows 8.1, macOS, and Linux.

All the effort the company has put in getting Microsoft Edge right convinced the company it’s time for everyone on Windows to at least give a try to the new browser, though in some cases, the software giant’s tactics have been rather aggressive.

“You see, Internet Explorer is a… (read more)