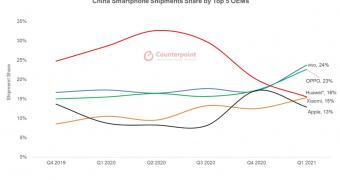 Huawei’s legal problems in the United States have made it a lot harder for the Chinese tech behemoth to keep its sales at record levels, so in the last 12 months or so, the company has been struggling with declining shipments pretty much all over the world.

Including in the domestic market, that is, as new data shared by Counterpoint indicates not only that Huawei lost the leading place, but it keeps losing ground even in China.

At this point, Vivo is the number one phone maker in China with 24 percent market share in the first quarter of 2021, followed by OPPO with 23 percent. Huawei is only third with 16 percent, but both Xiaomi and Apple and Apple are pretty close with 15% and 13%, respectively.

“The quarter marked the inevitable succession of Huawei’s leadership, as the beleaguered handset maker struggled to maintain shipments. vivo and OPPO emerged as clear leaders, accounting for nearly half of all smartphones shipped during the period,” Counterpoint read more)