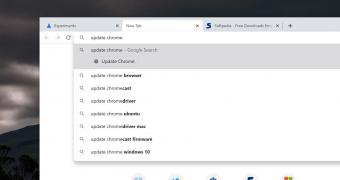 Google Chrome continues to be the world’s number one browser, not only on the desktop but also on mobile, and third-party statistics point to a market share of around 70 percent.

In other words, no less than 7 in 10 devices out there run Google Chrome, which is totally impressive given that most of them already come with another browser pre-loaded.

Windows computers, for example, offer Microsoft Edge as the default browser, and yet most people switch to Google Chrome for various reasons.

This huge market share means Google needs to continue the work on its app and provide the millions of users out there with new functionality, and the latest version of the browser does just that.

In other words, Chrome 87 introduces several new features, including so-called Chrome Actions that allow you to perform a series of tasks straight from the address bar.

As everybody knows already, the Chrome address bar is called Omnibox, as it provides access not only to the URL of eac… (read more)

46 mins ago
wpDiscuz
Share this Article
Email sent!
We use cookies to ensure that we give you the best experience on our website. If you continue to use this site we will assume that you are happy with it.OkNo