Last November, Lush Cosmetics posted a series of anti-union messages on the Hive, its internal portal for employees in North America. Days earlier, managers had distributed and read these letters aloud to unionizing workers at a Lush warehouse outside of Toronto, Canada.

“In Canada, unions are a business,” one letter obtained by Motherboard and signed by Lush’s executive vice president, Peter Higgins, said. “They take money from every employee’s paycheck.”

“Don’t get tricked,” it continued. “Signing a union card or signing anything through a handout or a web page, means you are agreeing to a legal contract with a union. That legal contract could be over 100 pages long. You should not sign anything you have not read.”

A blog post with links to this letter and two anti-union memos was posted on the internal portal, urging employees in North America to prime themselves on the company’s stance toward unionization. “Please familiarize yourself with the three letters we provided to our impacted staff in Toronto,” management wrote on November 12, 2020. “It is important to clarify that none of the three Toronto facilities are currently unionized.” 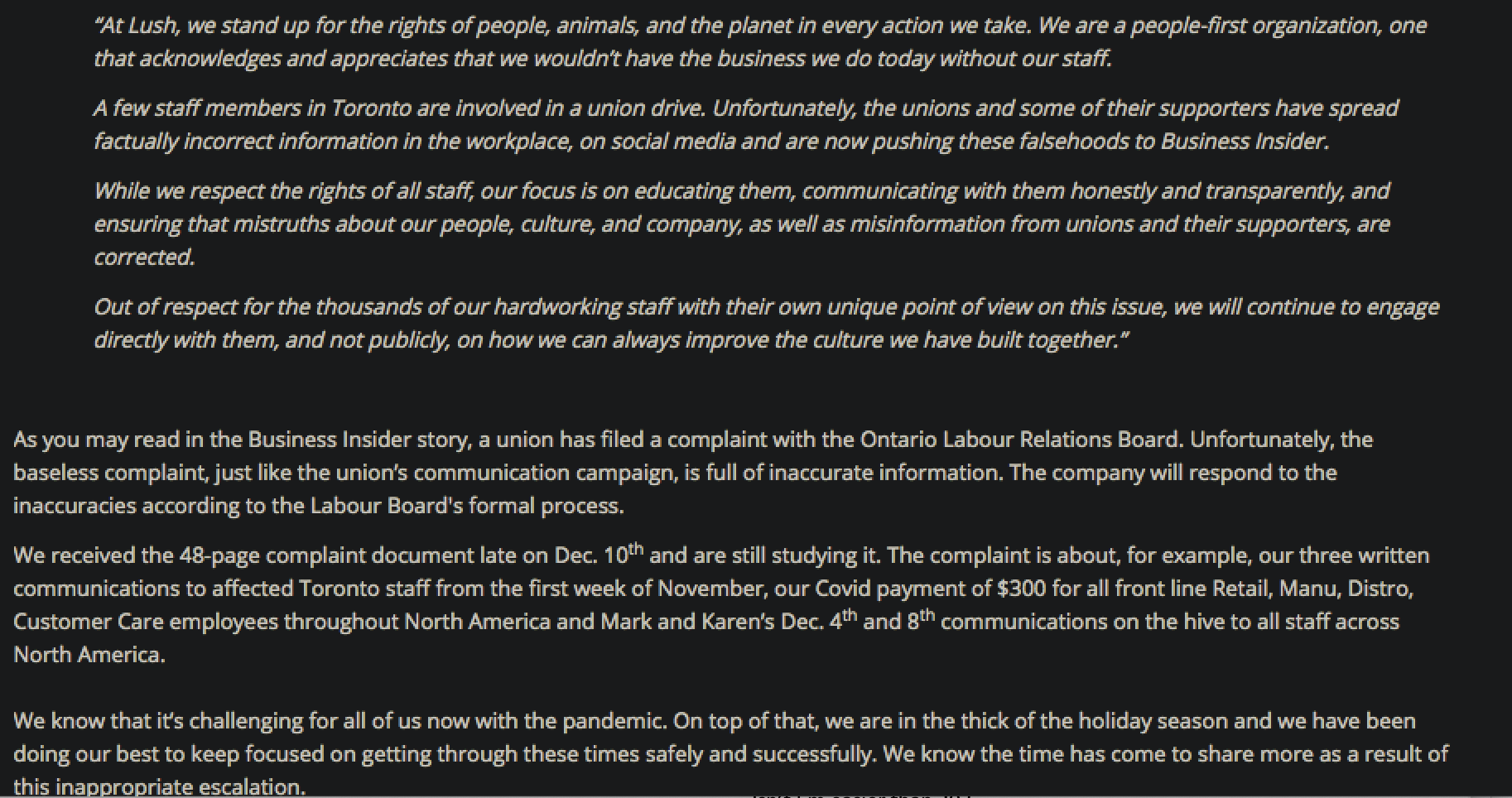 These anti-union messages fall within a larger campaign led by Lush to both squash a union drive led by SEIU’s Workers United Canada Council at its distribution facility in Canada. Business Insider first reported in November that Lush was anti-union. The documents on the Hive were issued after Business Insider’s initial report. They were seemingly designed to send a broader negative message to Lush retail employees around the United States about unionization. The campaign has included compulsory anti-union meetings and the interrogation of workers, according to Business Insider and independently confirmed by Motherboard.

“At Lush we believe in worker rights and the employee decision to unionize or not,” said Wendy Kubota, brand director of Lush North America. “We also believe employees have the right to receive correct and accurate information regarding unionization, which includes Lush’s responsibility to address any reports that contain mistruths about our people, culture and company. This includes any misinformation from unions and their supporters.”

“This is the strongest anti union campaign I’ve ever seen in Canada,” Richard Besinger, senior advisor for Workers United North America, an affiliate of SEIU, which is supporting the unionization effort. “It feels more like the US South. It really had a chilling effect.”

Inspired by the union drive in Canada, Lush retail workers in the United States, specifically in New York City and San Francisco, have also talked about the potential for organizing a union to protect themselves against layoffs, understaffing, and stagnant wages.

Last month, Lush workers in Canada and the United States as well as a group of unionizing manufacturing workers in Australia, who’ve been meeting regularly on Zoom to organize, launched a group called the Lush Global Union. They’ve also started a petition demanding Lush refrain from anti-union tactics and asking it to “publicly state it will bargain in good faith with any union chosen by Lush employees.”

“We are aware of the campaign by a group of people working to unionize Lush North America,” Kubota, brand director of Lush North America, said. “Out of respect for the thousands of our hardworking staff with their own unique point of view on this topic, we will continue to engage directly with our people, and not publicly, on any misinformation about our hundreds of workplaces we have proudly built and operate together for our customers.”

The cosmetics retailer, which sells creams, soaps, shampoos, masks, and scrubs using vegan and vegetarian recipes in 49 countries, has long touted itself as an ethical company, noting animal protection, 100 percent recycled packaging, and workers’ rights among its values. Lush’s website states that it has an “ethical buying policy,” which takes into consideration “worker’s rights” when deciding which companies to buy raw materials from. Among its considerations when buying ingredients are “unions, collective bargaining, health and safety, freedom to leave, fair pay, working hours, discrimination, [and] no child labor.”

“Back in August, I was pissed because there was a business update from my CEO Mark Wolverton that unfortunately we had to cut 50 percent of staff across North America.” Dolso-Morey said. “I commented on this and the gist was I called him a ‘capitalist scumbag.’ Only Lush employees could see it. I said all this great stuff which was really, really good.”

One of his posts, reviewed by Motherboard said, “I love this company and its products, and my fantastic co-workers but cannot for the life of me wrap my head around why being anti-union is the focus for so many,” he wrote. “We are WORKING through the pandemic.”

In January, Dolso-Morey received a letter from management warning him about his posts, but stating the letter should not be construed as discipline and he could still express opinions about the union drive.

“I felt like it was a disciplinary letter sent in response to my messages of solidarity with the Canadian workers,” Dolso-Morey, told Motherboard. “After that, a manager approached me and told me, ‘I want to help you not get in trouble so I want to help you come up with comments when you have the need to say something in the future.”

“Since on or about January 6, 2021, the employer threatened employees at its San Francisco, CA location because of their union activity and concerted protected activity on behalf of their coworkers and also in support of Lush workers in Toronto who are organizing a union,” it reads.

Organizers of the Lush union drive at the Lush distribution center outside of Toronto say Lush’s messaging has a dampening effect on their union drive, in particular getting union authorization cards, which are needed from 40 percent of employees in Canada to hold a union election, signed by workers. But workers in Toronto are continuing to organize.

The Lush unionization campaign in Toronto began in late summer in response to the Lush’s decision to cut off $3 CAD an hour hazard pay. They had been organizing for a voice on the job, to push back against stagnant wages, and create more job stability for its contingent of seasonal workers—many who’ve worked for the company for years—who don’t receive healthcare, sick days, and other benefits offered to full time employees. But in January, the company ended a longtime extension of its seasonal contracts.

Christopher Flynn, one of the laid off seasonal distribution associates and a lead organizer of the union, told Motherboard the layoff announcement felt like an act of retaliation against union supporters. “There was really strong support for the union among seasonal staff,” he said. “The seasonal contracts are really bad, and some of us had been working for Lush for years, with continuous one month and two-week extensions.”

Do you have a tip to share with us about organizing at your company? Please get in touch with Lauren at Lauren.gurley@vice.com or securely on Signal 201-897-2109.

Under the new banner, Global Lush Union, Flynn says Lush employees around the world can connect and push back against the company’s anti-union tactics. “This is an ethics issue. You can’t say you support unions and not support your workers efforts to unionize,” he said.

“I hope this gives a platform for Lush employees no matter where they work, retail, distribution, production. Lush has principles it operates by and we think it should include the right to organize without interference.”

Check out the latest trailer for F9, the new Fast & Furious movie that arrives June 25