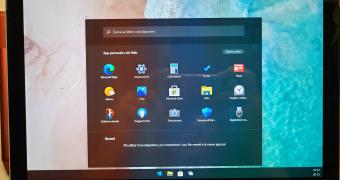 Windows 10X is expected to go live on the first wave of devices as soon as this year, but in the meantime, a build that leaked a few weeks ago gives users the chance to try it out early.

And of course, it was only a matter of time until Windows 10X was hacked to run on existing devices, so here’s the new operating system installed on a Microsoft Surface Pro 7 because why not.

By the looks of things, most drivers work correctly, so Windows 10X plays nice with the Surface Pro X.

Windows 10X was originally announced with the purpose of powering Microsoft’s push in the dual-screen device market, but given this new form factor is not yet ready for prime time, the software giant has since changed its goal.

So Windows 10X will first land on single screen devices, and this is expected to happen as soon as this year, with the spring likely to w… (read more)