Most of us tend to use YouTube and apps when it comes to streaming content on desktop, but there are instances when you’ve to rely on Chromium’s HTML-based in-built media player, which is used in Google Chrome, Microsoft Edge and other Chromium-based browsers.

As per the new code commits, it looks like Google is adding new playback speed controls to Chromium. This change is going to benefit all Chromium browsers, such as Microsoft Edge and Google Chome.

The other available controls seem pretty much the same, including the play and pause button, and full-screen. The interface of the player remains unchanged.

Last year, Google Chrome and Microsoft Edge were updated with new media playback controls. As you may be aware, the feature allows you to control the media contents directly from the toolbar. It comes with simple back controls with options to pause/resume the video and close the player.

The feature was later updated with support for the song’s album art and live captions. 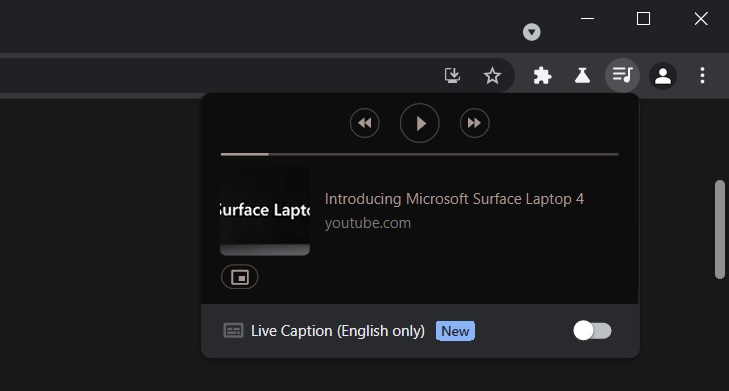 In Chrome 91, Google is experimenting with a new modern look for the media playback controls. As you can see in the above screenshot, Google has changed the interface of the player and enabled a new dynamic background to better support the album art (if available).

Likewise, Google has changed the position of controls. For example, the new progress bar is underneath the playback controls, which are now at the top. The other options are album art, song title and URL of the player.

The new media playback control is currently available in Chrome Canary only. It’s likely that the feature will also come to other browsers. If you can’t wait, you can enable it using a command-line flag:

You need to add the above command in the target field of the Microsoft Edge (Canary) shortcut.

In addition to these improvements, Microsoft and Google are also working on new Progressive Web App (PWA) features for Chrome and Edge.