If you are a fan of oldies, you might be interested in an evocative track that just dropped from prehistoric times. The notes in the below recording were played on a conch shell that was used some 18,000 years ago by ancient people, according to new research that identified the shell as the oldest wind instrument of this kind in the archaeological record.

These eerie sounds may have once captivated music lovers of the prehistoric Magdalenian culture that lived near Marsoulas Cave, a rich archaeological site in the French Pyrenees decorated with ornate rock paintings. Initially discovered in 1931 at the entrance of the cave, the conch “sheds light on a musical dimension until now unknown in the context of Upper Paleolithic societies,” reports a study published in Science Advances on Wednesday.

“This is one of the important discoveries in my life as a researcher,” said Gilles Tosello, a prehistorian at the University of Toulouse who co-led the study, in an email. “Probably because it is one of the most unexpected.”

The conch, made by the sea snail Charonia lampas, was considered an “exceptional discovery” in the 1930s, according to the study, but researchers at that time mistakenly judged it to be free from human modifications.

When Tosello and his colleagues—including co-lead Carole Fritz, head of research for the CNRS at the Prehistoric Art Research Centre—took another look at the conch, they realized that prehistoric people had deliberately altered the shell to suit a musical purpose.

The first tip-off for the team was that the apex of the shell, which is the pointed end that serves as the mouthpiece for most conch instruments, was broken. Given that the apex is the hardest part of a conch, the researchers suspected that a natural fracture was unlikely. 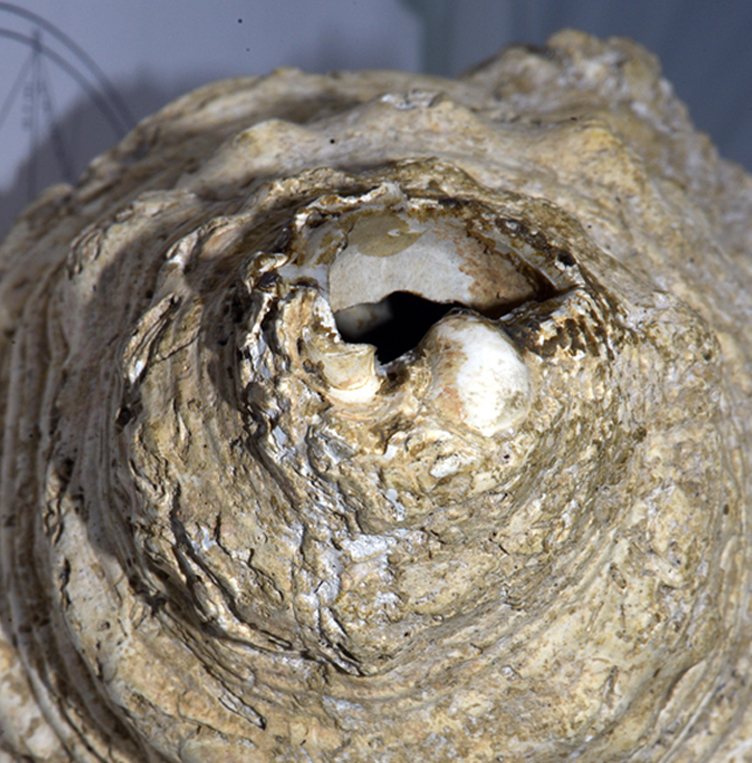 By examining the shell closely with special cameras and tomography scans, the team discovered a hole that was deliberately drilled under the apex, measuring about an inch deep.

“It is a complex technical operation with the flint tools available to the Magdalenians,” Tosello said of the drilling modification.

The team thinks that Magdalenians may have inserted a tube-like mouthpiece into the hole that facilitated the process of blowing through the shell to make music. Close examination of the conch also revealed that it was decorated in faded red pigment, suggesting that it was a prestige object in addition to a musical instrument.

The ultimate test of the instrument was, of course, to see if it could produce music. To that end, the team enlisted Jean-Michel Court, a professor of musicology at Toulouse University and a horn player. The apex was retouched so that Court safely could blow into the conch, and the researchers were elated to discover that the shell was still, after 18,000 years, a functional instrument.

“I was very moved,” said Tosello. “Suddenly, it was as if time had been abolished, a return of 18 millennia in a few seconds!” he said.

It’s no secret to archaeologists that people in this time period would have appreciated music, as flutes and other instruments have been found that predate this conch shell. But the conch is the oldest example of a shell-based wind instrument, according to the study.

Tosello and his colleagues hope to build on the visceral experience of hearing this ancient instrument by arranging a recital in the cave where it was discovered all those decades ago.

“It’s a shell that has ‘been waiting for us’ for 90 years to unlock its secrets,” said Tosello. “We will continue the research to try to reconstruct the complete instrument with its mouthpiece and then record the sounds in the very cave of Marsoulas, and in front of the entrance, to test the distance at which the sounds are heard.”