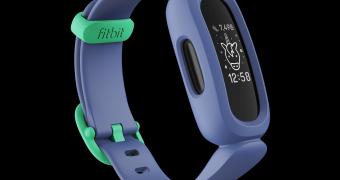 Fitbit has officially launched the new Ace 3, an activity tracker specifically aimed at kids and thus coming with several dedicated features in this regard.

First and foremost, the device sports a PMOLED touchscreen display, and as you can see in the photos here, it doesn’t boast a smartwatch appearance, looking more like an activity tracker.

The Ace 3 is swim-proof and packs a battery that can last for up to 8 days per charge. According to the official figures, it can recharge in two hours, with the Ace 3 to connect to an Android device or an iPhone using Bluetooth 4.2.

With a classic wristband made from silicon and coming in just one size, the Ace 3 can track the heart rate, while also packing an accelerometer and a vibration motor. Sleep tracking is also offered, and Fitbit says it has equipped with the watch with faces specifically aimed at kids.