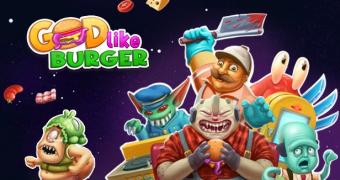 It looks like publisher and developer Daedalic Entertainment has a very busy start of the year. After announcing new titles like Glitchpunk and Hidden Deep, the German studio released its two The Dark Eye classic adventures – Memoria and Chains of Satinav, on consoles. Early this week, Daedalic Entertainment made one more announcement that involves an unreleased game: Godlike Burger.

Developed by Liquid Pug LLC, Godlike Burger is a cooking sim with a twist where players run a restaurant and kill aliens. The game will launch into Early Access in the first half of 2021, but an exact release date has been announced yet.

Godlike Burger combines elements of a cooking simulator and business management game, with a strong pinch of crime and dark humor. As expected, players will make burgers, run a restaurant, find creative ways to turn alien customers into tomorrow’s´ Special, and don’t get caught while doing it.