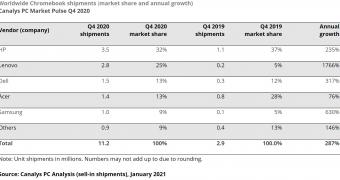 2020 ended up becoming a crazy year, there’s no doubt about it, and the global health crisis has changed so much around the world, including the way we work, learn, and do things every day.

With most schools and universities switching to online classes, it was obviously just a matter of time until the PC market recorded a massive boost in terms of sales.

And according to research firm Canalys, Chromebooks benefitted a lot from this trend, with HP alone recording a growth of no less than 235 percent year on year. The company sold a total of 3.5 million units, slightly ahead of rival Lenovo. But wait until you hear how much Lenovo grew in the Chromebook market.

Canalys says that with 2.8 million sold units in the fourth quarter of 2020, Lenovo posted an increase of no less than 1766 percent, which is more than impressive, to say the least, s… (read more)