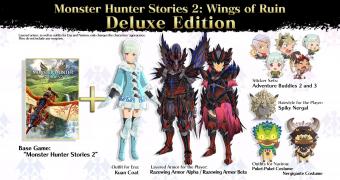 Apart from revealing the launch date of the game, Capcom released a new trailer for Monster Hunter Stories 2: Wings of Ruin, which sets the stage for the epic journey with Razewing Rathalos, announces the return of the self-proclaimed Felyne hero Navirou, and teases cooperative multiplayer quests.

Players who’d like a little bit more than just a standard experience will be offered the choice of getting the Monster Hunter Stories 2: Wings of Ruin Deluxe Edition, which includes Razewing layered armor sets and a Nergigante-inspired hairstyle for players, the Kuan Coat outfit for Wyverian compani… (read more)