In an internal email sent to employees this week, Steven Galanis, the CEO of celebrity video app Cameo, congratulated the company, saying its mission was “more important than ever,” while simultaneously hosting a profile of, and generating profit from, Gavin McInnes, the founder of far-right street-fighting gang The Proud Boys which played a role in the violent riots on Capitol Hill this week.

“Team—yesterday was one of the toughest days in the history of our democracy. As a historian, the parallel that drew closest to mind was the 1933 Reichstag Fire in Germany which Hitler used to establish much of the iron fisted rule that would eventually enable the Holocaust,” Galanis wrote in the email, which a Cameo spokesperson shared when asked for comment on Cameo hosting McInnes. (Disclosure: Gavin McInnes was a co-founder of VICE. He left the company in 2008 and has had no involvement since then. He later founded the Proud Boys in 2016.)

“As trying of a day as it was, our Republic is still standing and our Constitution proved resilient. This is the United States of America, ‘the City on a Hill’, not a banana republic. There will be an orderly transfer of power; at Noon on January 20th, 2021, Joesph R. Biden, Jr. will take the Oath of Office and will be sworn in as the 46th President of the United States on the same steps where a mob gathered yesterday during an attempted coup. We must all come together and drop the acrimony so we can start healing again. Let this be a lesson to all of us about how fragile our democracy is,” the email continued.

Do you work at a tech platform? We’d love to hear from you. Using a non-work phone or computer, you can contact Joseph Cox securely on Signal on +44 20 8133 5190, Wickr on josephcox, OTR chat on jfcox@jabber.ccc.de, or email joseph.cox@vice.com.

Cameo is an increasingly popular app where users pay celebrities to record short personal videos. Celebrities charge everywhere from $50 up to thousands of dollars for a clip, and Cameo takes a 25 percent cut of each transaction.

McInnes charges $75 and has created at least 55 videos, according to his Cameo profile. Cameo’s potential cut of that material totals at just over $1,000.

McInnes is somewhat popular on the Cameo platform among his customers, judging by multiple happy reviews left by those who purchased or received video messages from him.

“Perfect! This was a surprise for my husband & he loved it!” one user wrote.

“Absolutely spot on for what was requested and recorded in good time too! Cheers Gavin!1” another added. 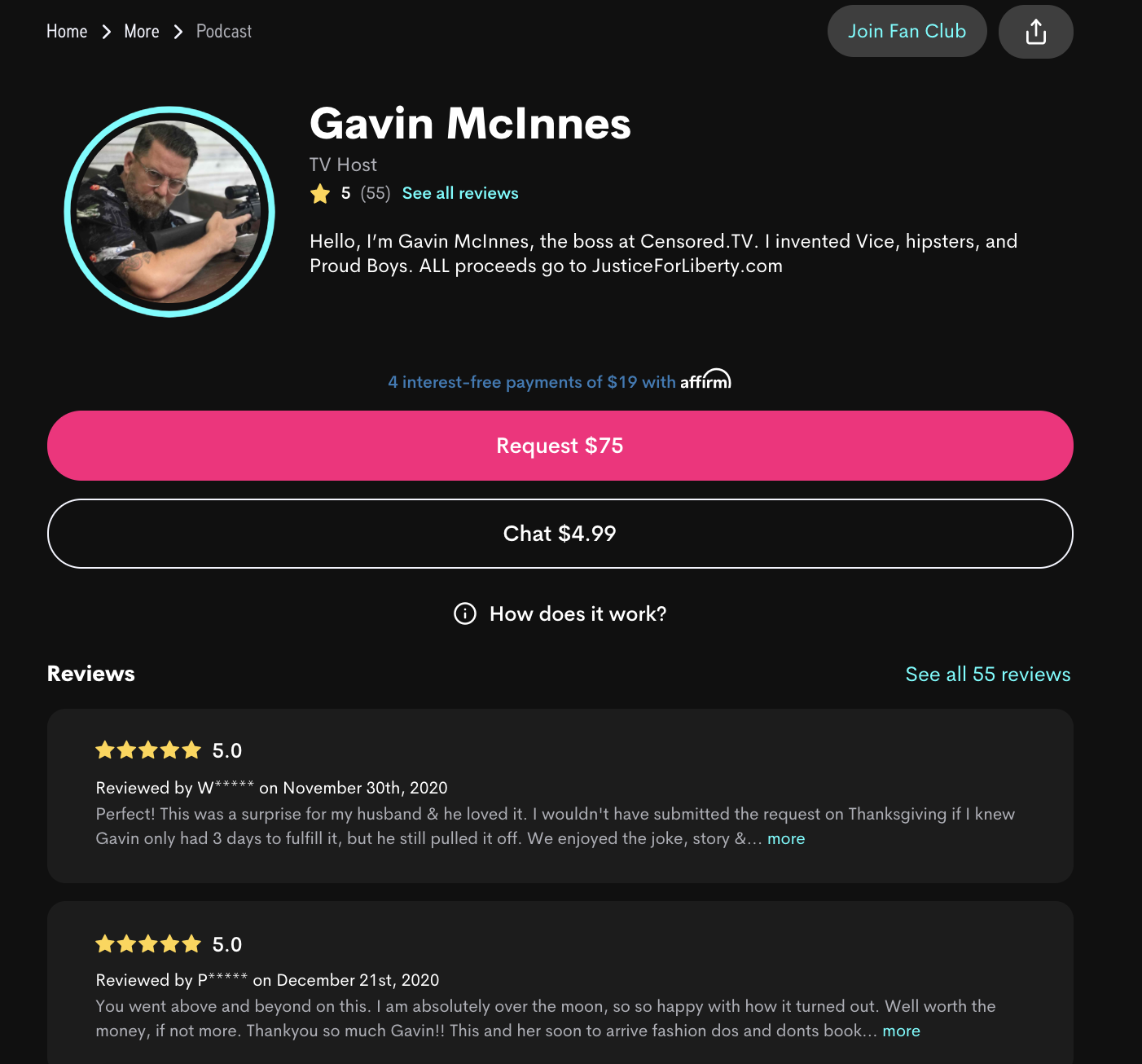 Members of the Proud Boys have boasted of their involvement in the insurrection on Wednesday at the Capitol. During a Presidential debate in September, Trump told the Proud Boys to “stand back and stand by.” Shortly before Wednesday’s riots, some Proud Boys members turned their backs on the police, with one prominent member writing in an online post that “The enemy is showing their hand. The police will be arresting patriots who participate in civil disobedience.”

McInnes left the Proud Boys in 2018 after the Guardian reported that the FBI had categorized the group “with ties to white nationalism.” Enrique Tarrio currently leads the group. McInnes still advertises his founding of the group on his Cameo profile.

When Motherboard asked if hosting McInnes violated any of Cameo’s policies, a company spokesperson said in an email that “Cameo aims to be a ubiquitous marketplace. To that end, we believe our customers should be in control of the connections they choose to make through our platform. While we do not endorse the beliefs or opinions of the Talent or fans who use Cameo, when it comes to content shared on Cameo, our platform policies and terms of service explicitly state that hate speech, inciting violence, harassing, and illegal activity are expressly prohibited. Should we be notified of behavior that violates these rules, we enforce our policies in various ways, including issuing warnings, removing content from our Site, temporarily suspending account access, and in some cases, permanently banning users.”

The spokesperson added that McInnes’ profile has been flagged, and Cameo is in the process of reviewing it.

“As per our enforcement practices, we are suspending Gavin’s profile for the duration of the investigation. Should we uncover any policy breaking content, we will take action,” the spokesperson added.

Galanis’ internal email concluded “From the Cameo perspective our mission is more important than ever. We make people smile, laugh, and cry everyday. The world is a happier place because of our product. As our platform becomes more ubiquitous, our responsibility to keep our fans and talent safe will become increasingly important. I don’t have all of the answers on what that looks like today. I’m processing all of the same thoughts and emotions in real time as you are. I am confident that guided by our Core Values, we will navigate these issues in the years to come as well as any Social Media company on the planet. I feel so blessed to be on this wild ride with all of you. You guys inspire me everyday.”