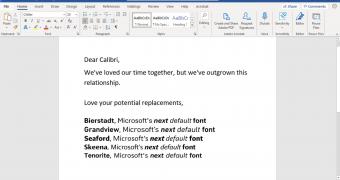 Microsoft has announced that it plans to replace Calibri as the default font in Microsoft Office, and now the company wants users to choose its successor in the productivity suite.

In other words, users are allowed to vote for the next default font in Microsoft Office, and the Redmond-based software giant proposes five different versions called Tenorite, Bierstadt, Skeena, Seaford, and Grandview.

The good news is that Calibri just wouldn’t go away, as it’ll remain a part of Microsoft Office going forward. So while Microsoft Office will come with a new default font, Calibri will still be available in the productivity suite.

“Calibri has been the default font for all things Microsoft since 2007, when it stepped in to replace Times New Roman across Microsoft Office. It has served us all well, but we believe it’s time to evolve. To help us set a new direction, we’ve commissioned five original, custom fonts to eventually replace Calibri as the default,” the Redmond-bas… (read more)