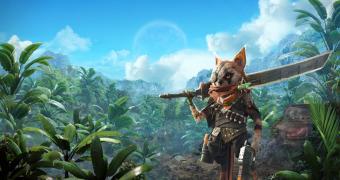 THQ Nordic’s Biomutant, the open-world, post-apocalyptic Wung-Fu RPG, finally has a release date, the publisher revealed over the weekend. Along with a brand-new trailer that offers players a glimpse at the game’s flashy combat moves, THQ Nordic announced Biomutant will land on PC, Xbox One, and PlayStation 4 on May 25.

More importantly, pre-orders are already open and offer interesting incentives to those who have already decided that this is something they’d like to play at launch. For example, all players who pre-order Biomutant on any of the supported platforms will receive the Merc Class. On top of that, PlayStation 4 players will get a theme of Biomutant, which won’t be available on any other platform.

Those who don’t pre-order the game will still be able to get the Merc Class after release, as THQ Nordic announced they will offer it as a DLC post-release. But wait, there’s more! Biomutant Collector’s Edition and Biomutant Atomic Edition will also be availabl… (read more)