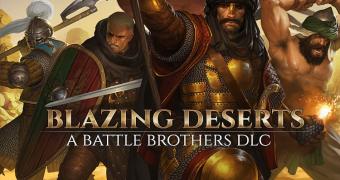 Overhype Studios, the developer behind Battle Brothers, the turn-based strategy RPG that made waves five years ago when it first launched on PC, has just announced a new DLC will be released next month.

Dubbed Blazing Deserts, the new DLC is the biggest and most ambitious piece of content to be released by Overhype Studios since the launch of Battle Brothers. It will be available on August 13 for $15 / €15 via Steam, but it can’t be pre-ordered yet.

As the name suggests, the new DLC will take players to new lands to the south where they will be able to wear new gear inspired by Arabian and Persian cultures of the medieval ages. Also, Blazing Deserts lets players employ alchemical contraptions and primitive firearms to beat the enemies.

However, Blazing Deserts’ new content doesn’t limit to the south, as players will notice new features such as the new environments for fights that will also be… (read more)

Ubisoft Delays The Settlers for the Second Time Over Quality Concerns

A school district in Indiana, trying to ensure all students have access to the internet for virtual learning, said it's sending 35 WiFi-equipped buses across town during school hours. https://cnn.it/3aDOi8p

Kamala Harris' Indian roots and why they matter https://cnn.it/3kGr8Tc