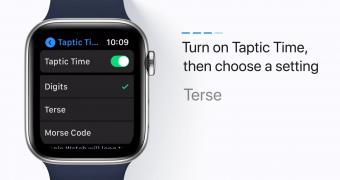 Apple Watch is by far the number one smartwatch out there, and the third-party figures shared by research companies out there pretty much speak for themselves.

But the huge number of users doesn’t necessarily mean everybody knows how to make the most of the Apple Watch, and this is why the Cupertino-based parent company has published a video to highlight one of the features many people don’t even know it exists.

It’s called Tap Out Time, and it pretty much comes down to the Apple Watch vibrating on your wrist to indicate the time according to your settings.

In other words, it’s a way to figure out the time without actually looking at the screen, and while it’s obviously an accessibility feature, it also comes in handy to everybody.

How to enable the Tap Out Time feature

As Apple itself demonstrates in a video published this week, it’s pretty easy to enable this feature. Simply open the Settings app on the Apple Watch, go to the clock menu and yo… (read more)

13 hours ago
wpDiscuz
Share this Article
Email sent!
We use cookies to ensure that we give you the best experience on our website. If you continue to use this site we will assume that you are happy with it.OkNo