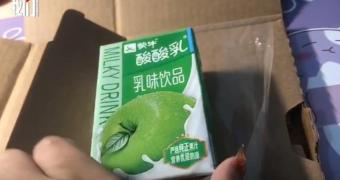 The iPhone 12 appears to be selling like hotcakes these days, as statistics show the new smartphone series was so successful that it helped Apple surpass Samsung and become the number one phone maker in the fourth quarter of 2020.

And a woman in China wanted to help Apple boost its sales, so it ordered an iPhone 12 Pro Max from the official Apple website.

Everything worked just as expected, so after paying over $1,500 for the device, she was waiting for the iPhone 12 to arrive at the parcel locker close to her home. And while the parcel arrived on schedule, what she found inside the iPhone 12 box wasn’t an iPhone but an apple-flavored yogurt.

Without a doubt, this is quite unexpected, especially given the device was ordered from Apple, and now everybody believes the iPhone was extracted from the box and replaced with the yogurt on its way to the parcel locker.