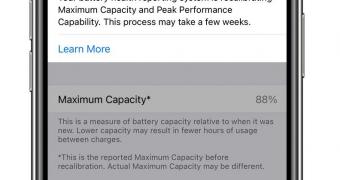 We’ve known for a while that iOS 14.5 would introduce a series of welcome updates, but now it looks like Apple has also prepared a little surprise for device that will receive this version.

iOS 14.5 will introduce a battery recalibration feature, which would essentially help the device display the correct information in the battery health reporting screen.

The feature will recalibrate the maximum battery capacity and the peak performance stats, so in theory, you should get a clearer picture of the battery health of your device.

“iOS 14.5, coming later this spring, includes an update where the battery health reporting system will recalibrate maximum battery capacity and peak performance capability on iPhone 11, iPhone 11 Pro, and iPhone 11 Pro Max to address inaccurate estimates of battery health reporting for some users. Symptoms of this bug include unexpected battery drain behavior or, in a small number of instances, reduced peak performance capability. This inac… (read more)