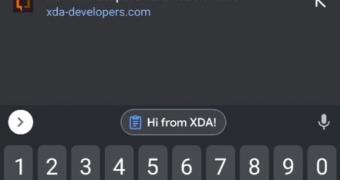 One of the overly-discussed features that are part of the latest iOS version is the warning displayed to users when an application accesses the clipboard.

Available in iOS 14 on all supported iPhones (iPhone 6s and newer), the feature displays a message at the top of the screen whenever an application reads the content in the clipboard to paste it into its interface.

This new feature has led to discoveries that some apps access the clipboard without actually needing to, and as it turns out, Google liked the idea so much that it’s now working on bringing to Android.

As per a report from XDA, Android 12 will come with a similar capability, essentially displaying a warning when an application reads the content stored in the clipboard.

This time, the notification wouldn’t be displayed at the top of the screen but at the bot… (read more)