It all started with some green turtles. Tomoko Narazaki, an ocean researcher at the University of Tokyo, wanted to understand how these animals are able to navigate across the ocean, so her team displaced a turtle population from one region to another and tracked their movements to get a sense of how they reacted to the change.

The tracking data revealed a mysterious surprise: the turtles often swam in circles for no apparent reason. “To be honest, I doubted my eyes when I first saw the data because the turtle circles so constantly, just like a machine!” Narazaki said in a statement.

Given that it is more efficient for marine animals to swim in straight lines, the puzzling circles prompted Narazaki and her colleagues to look into observations of other sea creatures. To their astonishment, animals as diverse as sharks, seals, penguins, whales, and, of course, turtles engage in this unexplained circling behavior.

The discovery, which was made possible thanks to advances in tagging and 3D-biologging technologies, reveals that swimming in circles is a widespread adaptation that may serve many ecological functions, according to a study published in iScience on Thursday.

“Analysis of animal tracks provides our understanding of navigation, moving capacity, and internal state of moving animals, as well as identifying the effect of external factors affecting their movements,” said Narazaki and her colleagues in the study.

“Marine animals move through an inherently 3D environment, yet their movements have been primarily examined in less dimensions,” the team added, a discrepancy that is “due to logistical and technical difficulties primarily derived from seawater’s impermeability to radio waves.”

In other words, collecting high-resolution information about the motions of marine animals in three dimensions has been an entrenched technological challenge for scientists. But within the past decade or so, the advent of sensors that can record detailed geographic and behavioral data has allowed scientists to hone in on precise features of animal movements such as pitch, heading, and small changes in depth. These biologging innovations now enable scientists to capture behaviors like the circle-swimming described in the new study. 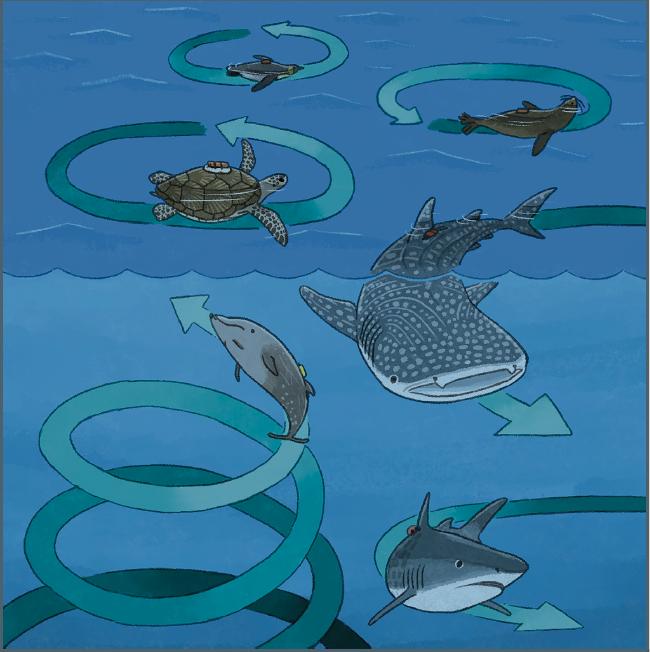 Narazaki’s team observed all kinds of different circling behaviors that ranged from a courtship circle performed by a male tiger shark to impress a female, which was captured by a mounted camera on the animal, to passive spiral dives seen in resting elephant seals, which are beautifully described in the study as “drifting down like falling leaves.”

Some of the circling events were likely linked to foraging activities, as they took place in known feeding grounds. This type of predatory circling is not especially surprising, as scientists have previously documented many marine hunting strategies that involve swimming in circles, such as the “bubble-net” method used by humpback whales.

But the team also observed many instances of animals swimming in circles outside of their feeding grounds or during periods of the day or night when specific species are not known to actively hunt.

While some of those observations remain mysterious, Narazaki and her colleagues suggest that many animals might swim in circles to collect navigational information. The team speculates that these movement patterns may even represent an intuitive connection to Earth’s geomagnetic field.

“Interestingly, submarines also circle during geomagnetic observation because accurate measurement can be achieved by using values measured from all directions to cancel noises, such as hull magnetization,” the researchers note in the study.

“Animals might circle to derive directional/positional cues from the geomagnetic field, especially in navigationally challenging situations,” they added.

Of course, the team also offers the possibility that these animals circle for multiple known and unknown reasons at the same time. Species may circle as a foraging strategy while simultaneously picking up geomagnetic information from Earth’s magnetic field.

To understand the circling behavior better—and perhaps unlock new discoveries about the habits of marine animals—Narazaki and her colleagues hope to conduct more undersea observations with sensor tags that include cameras.

“This is an observational study based on the examination of high-resolution 3D movements of tagged animals,” the researchers said in the study. “As such, our study lacks information about the surrounding environment such as landscapes, landmarks, and presence of other individuals of the same and/or other species.”

“Simultaneous analysis of high-resolution 3D movements and animal-borne video recordings would be useful to examine circling movements in the context of social interactions and/or prey capture,” the team concluded.