Roughly 75 workers walked off the job on Thursday at the construction site of a future Amazon fulfillment center in southern California—forcing most of the construction operations, including a large crane, to come to a halt.

Workers are striking at the future Amazon fulfillment center in Oxnard, California, because an Amazon contractor at the site, Building Zone Industries, has hired non-union, out-of-state workers to work on the project. This comes amid high rates of unemployment stemming from the COVID-19 in the predominantly agricultural, working-class Latinx community.

“We want to send the strongest possible message to Amazon’s contractor,” Martin Rodriguez, an official at Ironworkers Local 433, told Motherboard. “We’re not going away peacefully into the night.” 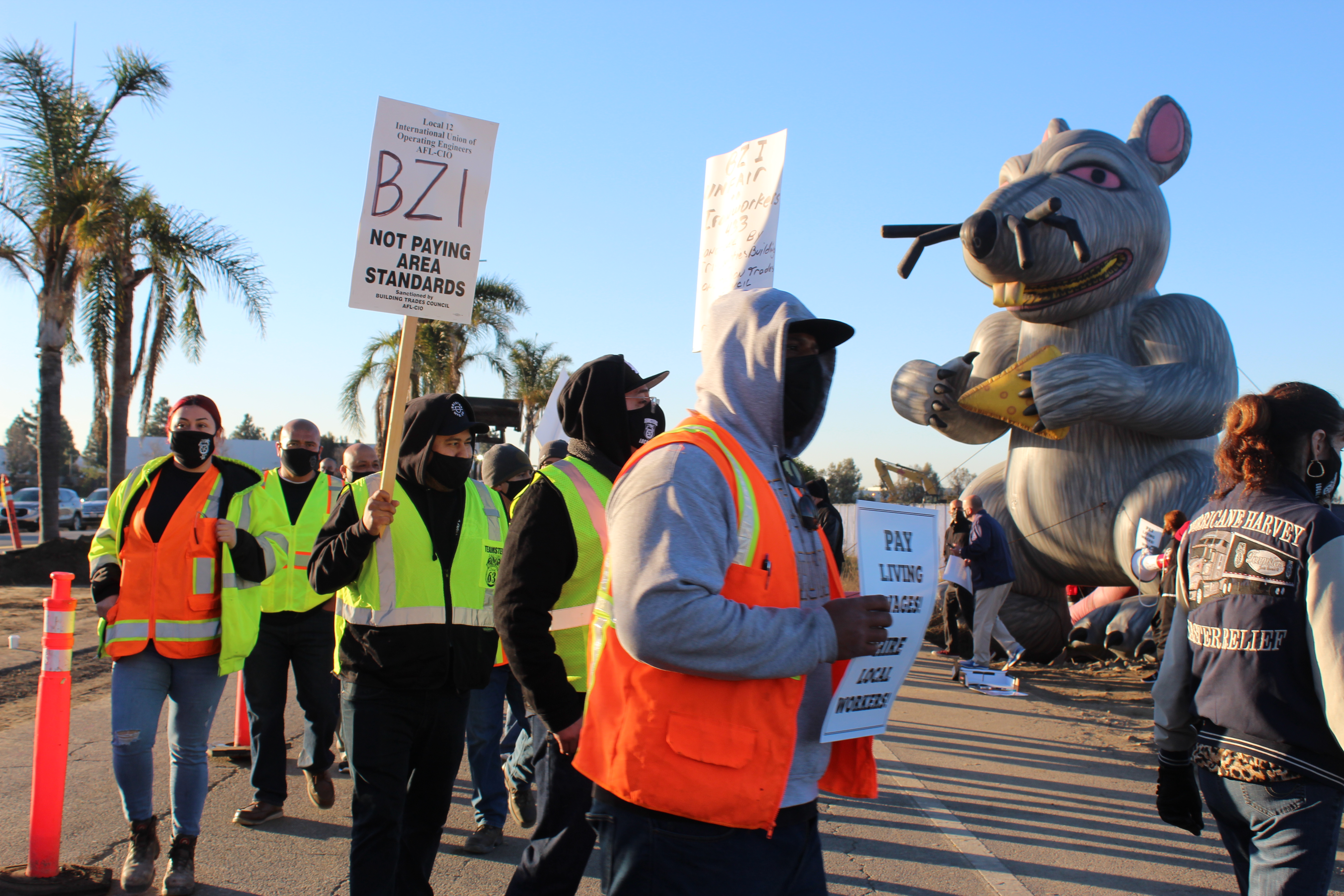 More than 100 people participated in Thursday’s picket, set up by Ironworkers Local 443, including 75 union workers and 25 non-union workers who refused to cross the picket line to work on the construction site on the day they were scheduled to raise the walls of the new fulfillment center, a Teamsters representative on the picket line told Motherboard.

The action marks one of the first strikes led by construction workers at an Amazon facility in the United States, and happened days before Amazon warehouse workers in Bessemer, Alabama are expected to begin mail-in voting in a historic union election. So far, no Amazon employees in the United States have voted to form unions, and the company has made it clear that it opposes unions in its facilities. 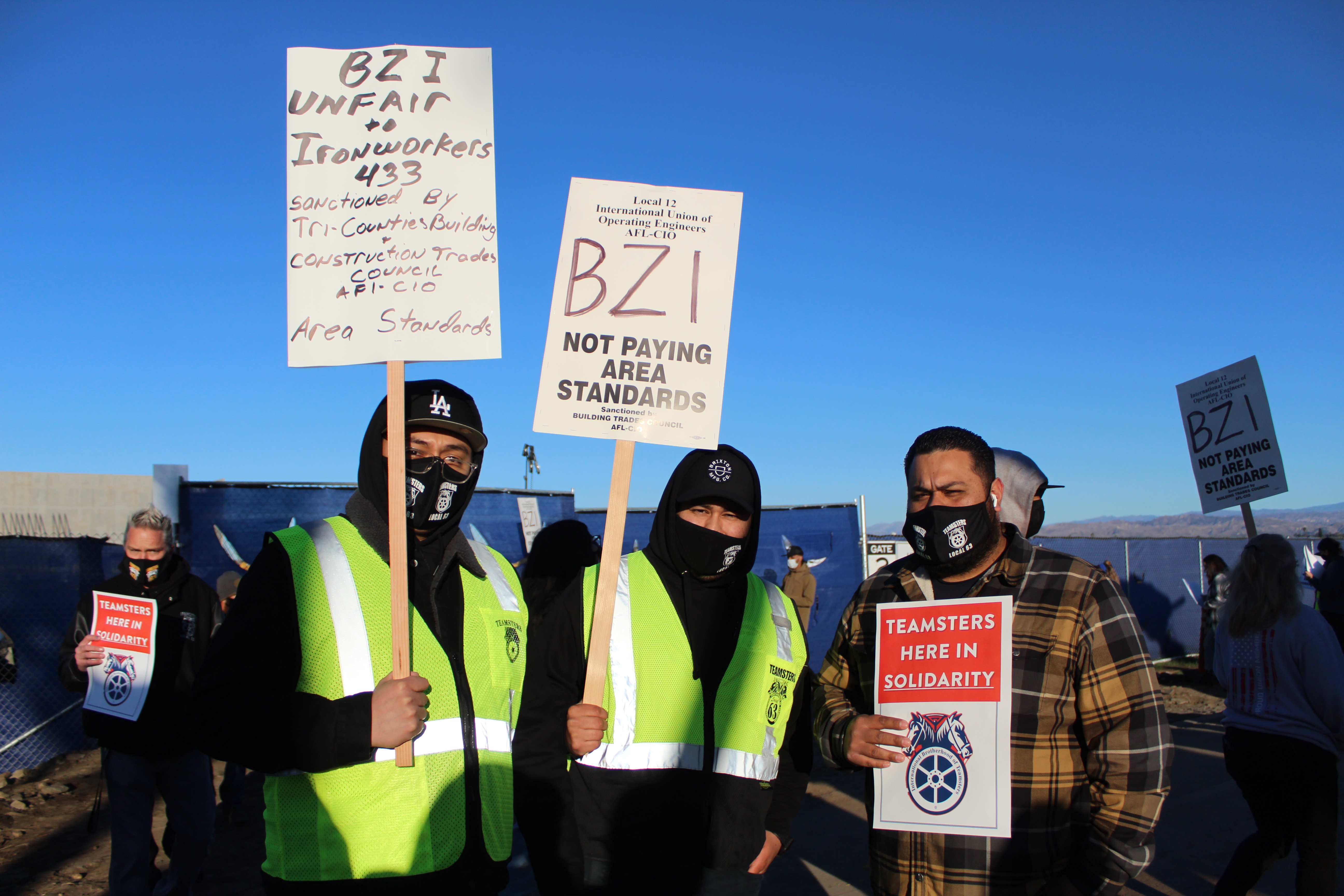 This type of action is known in labor terminology as “an area standards picket,” where workers protest a targeted employer’s payment of wages below a level set by other unions in an area. In this case, the targeted employer is Amazon’s contractor, Building Zone Industries, which is based in Utah.

The standard wage in the area for unionized workers is roughly $30 an hour plus benefits and healthcare, which is significantly higher than non-union construction workers earn.

“We have 18,000 people out of work in our community, yet they bring in contractors from out of the area and take our tax base away,” Rodriguez, the Ironworkers Local 433 official, said.

The new fulfillment center, Amazon’s largest type of warehouse, will be the first in coastal Southern California, and promises to bring 1,500 jobs to the area. In August, Amazon said that it planned to double its physical space—which includes warehouses, offices, and groceries stores—in 2020.

“One of the problems with these new warehouses is that Amazon’s hides between their developers [instead of being held accountable for the type of workers on a project],” said  Randy Korgan, the director of Amazon Project, an organizing initiative run by the International Brotherhood of Teamsters in communities, where Amazon has opened California facilities.

Amazon and BZI did not immediately respond to a request for comment.

Many unions and community activists in California say that Amazon’s warehouses and presence in towns and cities has led to more harm than good. Their concerns include low wages in dead-end non-union jobs, noise and traffic congestion, and environmental pollution in poor communities of color.

“We’re patting Amazon on the back for paying $15 an hour in its warehouses, but this is what I was paid in 1990 to work in a unionized warehouse,” Korgan said. “The proliferation of Amazon jobs is a race to the bottom.”